there seem to be two distinct narratives emerging

a lot of ground level spectators seem to be under the impression that there was a concerted, deliberate attack on the shop by some lefty / anarchists which the police stepped in to stopped (ask someone what caused the fuss, and they will say "tescos"

on the other hand, other people are saying that seventy police with helicopters and horses converged to evict four (4) people from a squat, and that when they saw 70 police on their street, a lot of other locals emerged to find out what the hell was going on and things escalated from there 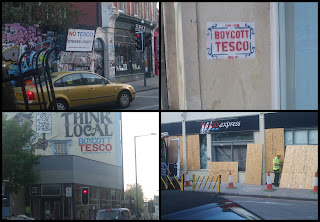 and now, here is a true story:


an old man became very scared, because he thought that there was an unidentified intruded in his garden -- whether a drunk, a burglar or a some kids fooling about, he did not know

he dialled 999, or, for listeners in America, 911, and asked to speak to the local police "I am very scared because I live alone and there is an unidentified intruder in my garden"

"it doesn't sound like he's committed any crime" said the officer "and at the moment, we really can't spare any officers -- we will send a car to check it out, but it might not be for three or four hours."

a bit late the old man phone the police again

"you don't need to bother with that police car" he said "the intruder was holed up in my potting shed, so i got my old shotgun and killed him"

five minutes late, the house is surrounded by panda cars, armed officers, searchlights and a helicopter is circling over head. in all the commotion, a very surprised looking tramp emerges from the potting shed, and his led away by a liason officer

The police officer in charge is absolutely furious

"You told us you'd killed him!" he said
"Well, you told me you didn't have any spare policemen" said the old man

The Bristol Riots of 1831 over the reform bill saw the Mayor's House looted and the gaol demolished, cavalry charges against the mob and four people hanged: you have a lot of ground to make up.