Nothing Can Stop…the Sandman! 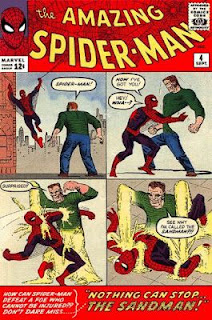 J. Jonah Jameson wears blue and green striped boxers at a time when briefs were the norm for older men.

Miss Brant’s first words to Peter are “Would you take these trousers to Mr. Jameson, Peter.”

The Principal of Mid-Town High is Mister Davis. Peter Parker’s science teacher doesn’t have a name.

There is no streaming or specialization at Mid-Town High. Prodigies like Peter Parker go to the same science classes as thickies like Flash Thompson.

In the first panel of Amazing Spider-Man #4, Spider-Man hangs upside down, looking at the face of J Jonah Jameson on a hoarding. He is still attacking Spider-Man. “Some guys just never give up!” he exclaims. In the final panel, he asks the audience what they think his motivation is. “Why do I do it?” he asks “Why don’t I give the whole thing up?”

I seem to remember that Johnny Storm had a few choice words to say about the subject of giving up last issue. Fate really has to work very hard to get through to Peter Parker.

Spider-Man #3 rebooted Spider-Man as a masked crime fighter plagued by self-doubt. But it is Spider-Man #4 which finally nails what Spider-Man is all about. The Doctor Octopus story had Peter Parker in it, certainly, but Peter Parker was simply Spider-Man without his mask. The story was about how Spider-Man loses his self-confidence and how Spider-Man gets it back again.. This is the first time that Amazing Spider-Man has properly been a soap opera -- the first time Peter Parker’s life and Spider-Man’s life are separate strands which get tangled up into a bigger story. It’s the first of these old issues which I found myself re-reading puewlt for enjoyment. It truly is one of my favourite comics of all time.

All the main characters are now in place. Flash Thompson and Liz who have, up to now, been placeholders for “the jock” and “the jock’s moll” are now two characters in a school-based situation comedy. Between issues, Peter Parker has asked Liz out (I would like to have been, so to speak, a fly on the wall during that conversation!) ; she has accepted out of pity; but Peter has to break the date so he can go Spider-Manning. Up to now, we have had routine exchanges of insults, but this time we have something approaching wit.

Peter: I can take you out tonight, after all!
Liz: Really? Perhaps we should declare this a national holiday! I’m sorry Mr Parker, but I have made other plans!
Flash: Meaning yours truly, punk! Now run along and find your umbrella!

Similarly Aunt May, who up to now has been been limited to saying “Peter, dear, what’s wrong?” gets some of her own screen time. Peter uses a dressing gown to his spider suit from his Aunt; and she puts him to bed, thinking he has a fever. This is also the episode in which J. Jonah Jameson -- the embodiment of the mob in issue #1, and a mere plot device in issues #2 and #3 -- emerges as a character. Six months ago, Parker almost knocked a wall down, whining “Jameson…It’s all his fault!” Bur now, the “responsibility hero” is covering the rabble-rouser’s chair with web-glue, leaving him with the choice of sitting down all day or walking around the office in his underwear. It’s an incredibly petty thing for Spider-Man to do: one level up from putting a drawing pin on Teacher’s chair, and it's quite brilliant. And in a way, it's an example of Stan Lee's "realistic" approach -- thinking through what the logical results of webbing someone's chair would be.

Jameson gets his own back, kind of, later on, with a line that made me laugh out loud. After the Big Fight, Parker gives Jameson a reel of film, presumably worth thousands of dollars, apologizing that he didn’t have time to have it developed. “That’s all right! Don’t worry about!” replies J.J.J. “I’ll take the cost of development out of your pay.”

For the three plot threads — Spider-Man vs Jameson; Peter Parker vs Flash and Spider-Man vs Sandman to come together, we have to swallow a certain amount of coincidence. Reading these old issues, it sometimes feels like the only villains who don’t rampage through Peter Parker’s perfectly normal high school are the ones who rampage through the offices of the Daily Bugle. And the bit where the Sandman demands that Principal Davis writes him a diploma, and Davis bravely refuses, is frankly a bit feeble. But the idea that Spider-Man’s fights the Sandman in front of the kids who three minutes ago were poking fun at Parker because Aunt May made him carry an umbrella -- and that Jameson turns up to watch --  is such fun it doesn’t matter.

The plotting is beautifully tight. Ditko keeps setting up inconsequential chains of foreshadowing which pay off later in the story. Peter breaks his date with Liz because he wants to fight Sandman; this leads to him worrying about whether he should give up his duel identity or not; which leads to the teacher rebuking him for not paying attention, which leads him being made to run an errand after school. (The not paying attention incident happened in a generic classroom, but he is clearly asked to carry bottles from the lab to the boiler room. Regardless of what Ditko draws, Stan assumes that Peter is always studying Science.)  While he’s in the boiler room, Parker notices the janitor trying out a new vacuum cleaner. And, of course, six pages down the line, this very vacuum cleaner is used to defeat the Sandman. But at 21 pages, the story has so much space to breath that this kind of thing doesn’t feel remotely contrived.

The Vulture was a skillful jewel thief; Doctor Octopus a monomaniacal mad scientist. Sandman is simply a thug. The ability to turn to sand and back again isn’t that interesting, but Steve Ditko allows him to do some fun things with it — stretch his body like Mr Fantastic; turn into quicksand; becomes rock hard and then incorporeal like the Vision. Spider-Man’s battle with him follows the now established formula: Sandman gets the better of the first fight (Spidey runs away with a damaged mask) but Spider-Man uses his brain to win the second encounter.

Jack Kirby had been in street fights when he was a kid, and seen combat in the army: fights in Captain America often seem like hyper-exaggerated depictions of actual combat. The fight between Spider-Man and Sandman resembles no actual fist-fight or knife-fight that has ever been: it’s more like a series of proposals and objections; an exploration of how the opponents can use their powers. This makes it gleeful and funny, especially on a first reading; we are not thinking “who is going to win” or even “that must have hurt” but “what will they think of next?”
While the battle carries on, there is a continuous narration and backchat between the characters, as:

“I’ll just let my grains of sound ooze over there toward you..like having your leg in quicksand, isn't it”

It was always going to be hard to keep this kind of inventive writing up for very long, and within a few months, “fight scenes” will have degenerated be an endless sequence of A punching B while B makes a wisecrack, and B punching A while A makes a wisecrack. Indeed, by the end, Stan Lee gives up altogether and just runs with sound effects. But this is as good a superhero battle scenes as has ever been done. We don’t feel that the scenes about Peter Parker and Jameson are ballast we have to trudge through to get to the fight; or that the fight has interrupted the romantic comedy about Peter and Liz. The comic is a unified whole.

But in the end, it’s still about fame and infamy; about truth and lies; about the difference between what really happened and what the papers say happened. Parker, unbelievably, not only sells Jameson pictures of him fighting the Sandman (knowing Jameson will claim they were in cahoots) but actually fakes the pictures, convinced he isn't doing anything wrong.

The final page is a triple whammy. Panels 1 and 2 quite explicitly recapitulate the first panels of Amazing Fantasy # 15. Liz still isn’t interested in Peter while there are dream-boats like Flash Thompson around, and everyone drives off in Flash’s car leaving Peter by himself. And this time it’s mostly his own fault.

Panel 3 is Ditko at his most effortlessly brilliant; we’ve moved away from The Crowd looking stunned and incredulous at Spider-Man's TV act: now a group of individuals with individual voices talk about Spider-Man, not knowing that Peter Parker (still holding that damn umbrella!) is listening. Each face is a little character study. The old men, shooting the breeze; the younger women with their grocery bags, including one with terrifyingly trendy glasses; the impassive man reading the paper, and best of all the snooty man indicating that Spider-Man is probably crazy.

And the final panel is Peter’s soliloquy on the subject of Fame.

“Am I really some sort of crackpot, wasting my time seeking fame and glory?? Am I more interested in the adventure of being Spider-Man than I am in helping people?”

The answer is not "Because Uncle Ben". And it's not even “because the Human Torch taught me a good lesson about perseverance” or “because I can earn, like, $20,000 in one go selling pictures of myself to Mr Jameson”.

This time around, Peter Parker tries to pin the blame on God.

“I must have been given this great power for a reason! No matter how difficult it is, I must remain as Spider-Man. And I pray that some day the world will understand.”

As motivations go  “because God” isn't that much more help than "because Uncle Ben." Both come down to "just because".