Spider-Man versus Doctor Octopus, the Strangest Foe of All Time. 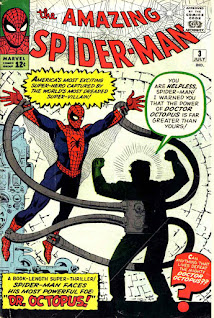 
Flash Thompson is back to being a red-head, but is not referenced by name.


Parker tells Jameson to have his cheque ready, even though he was paid in cash last month.


Ditko and Lee have different idea about why the Human Torch is taking time off from the Fantastic Four. On page 21, the art clearly shows him visiting a doctor and being given the all-clear. But on page 13, the text clearly says that he has over-used his flame power and needs to rest it.


Four months ago, Spider-Man was about to turn evil.


Two months ago, Spider-Man was looking for ways to make money.

This month, Spider-Man is a professional hero who has "cases" and "assignments" and "opponents".

This is the second consecutive issue which has ended with Parker looking relatively happy. It won't last.

Today, we would call Amazing Spider-Man #3 a reboot. Characters are created, status quos established and precedents that haven't even been established yet are daringly broken. This is the first fully fledged issue of the comic we now know as Spider-Man. And it's not actually very good.

The episode begins with Spider-Man defeating a gang of bank robbers; beating up all three of them in a single panel and leaving them hanging on the end of a cobweb. This is the first time we have seen him do this kind of thing, but it clearly isn't the first time he has done it. He introduces himself with the spider-signal; which the crooks are all familiar with. He doesn’t take any photos or claim any reward. Catching thieves (just like flies) is simply what he does.

And then he complains “It’s almost too easy. I’ve run out of enemies who can give me any real opposition. I am too powerful for any foes. I almost wish for an opponent who’d given me a run for my money.” Enemy; opposition; opponent. Spider-Man was introduced to the world as a wrestler; and Stan Lee's language is still the language of a fight promoter, talking up the challenger, making it sound as though the hero can't win.  “The world’s most dreaded super villain;” “his most powerful foe;” “can anything that lives defeat the mighty Doctor Octopus?” “the only foe ever to defeat Spider-Man;” “the power of Doctor Octopus is far greater than yours!” Each month from now on, Spider-Man will have a fight with an opponent; it will look as if he is going to lose; but he will win. When a challenger is particularly "popular", he will be invited back for a rematch.

“I almost wish for an opponent who’d give me a run for my money”. It’s now almost a year since Peter Parker told the old cop that catching criminals was none of his business. It isn't clear if Parker believes in God (although I will never not believe that Uncle Ben was Jewish) but he certainly believes in Fate, or talks as if he does. And if there's one thing we know about Fate, it's that you shouldn't go around tempting it.

It's been established over the last couple of stories that Spider-Man always loses the first bout with his challenger, goes away, uses his brain, and works out a way of winning the second round. This time, the formula is escalated in a frankly rather corny way. When Doctor Octopus throws Spider-Man through a window Whining Peter immediately decides (for the third time) that he’s going to quit being Spider-Man. He doesn't seem to be very badly injured; he just gives up. But it just so happens that the Human Torch is giving a motivational speech at Peter Parker’s school that very day.

There is no special reason for it to be the Human Torch; Spider-Man and Johnny Storm’s feud is yet to be established. It could just as well have been a policeman or a vicar. Johnny, often depicted as a spoiled brat, comes over here in rather a good light. The original idea for Spider-Man may have been “what if there were a person in the real world with superpowers”; but that idea has now subtly changed into “what if the superheroes lived in a world like ours?" What if a visit from an older lad who could spontaneously combust and throw fireballs around were a not-very-remarkable part of your school day? Which is, it has to be said, a lot more fun.


The Torch’s message is the same one that, oddly enough, a little spider once gave to a demoralized Scottish king: "If at first you don't succeed, try, try, try again." “The important thing is never give up. Remember that. Never give up.” So Spidey goes back and has another fight with Doctor Octopus, but this time, he uses Science to make Doctor Octopus's arms stick together, sprays web over his glasses, and knocks him out.

"Strange that an old fashioned punch to the jaw defeated the most dangerous villain I’ve ever faced" says Spider-Man. It is never clear whether we should regard these remarks as Stan Lee patting himself on the back for being so original, or reprimanding Steve Ditko for being so boring. I am inclined to think the latter.

Doctor Octopus is a visually charismatic figure; a classical mad scientist with four extra arms attached to his torso. They are very strong; and they can be any length Ditko wants them to be; but I never understood quite why they made him quite such a dangerous enemy. There are one or two nice scenes: Doc Ock disguising his arms as water pipes so a guard doesn’t notice him; and the arms reaching through the door of the Atomic Research Centre -- but the two fight scenes are a little nondescript. For a number of panels Ditko stops bothering with backgrounds altogether.

For once, we have a Spider-Man story which is not about fame: it's about pride. Octopus believes himself to be the most powerful man on earth; even though all he has is physical strength. Parker is defeated because he thinks he is defeated: once he believes he can win, he beats Octopus quite easily. The final frame underlines Peter’s confidence: Flash tells him that he is is a bookworm and the Torch is a real man, but rather than running away crying, Parker effectively responds that it was the “bookworm” side of him — Science — that defeated the bad guy.

Is Peter Parker coming to grips with his dual identity?

I think you're being a little harsh on this story, which I rate as by some distance the best one so far -- largely because Doc Ock is by some distance the best bad-guy. (When The Vulture returns a few episodes later, I simply sighed. When Doc Ock returns, it's a big moment.) I also think it's not impossible that the Torch's little never-give-up speech affected quite a few kids back in the 1960s.

That said, the last time I read this story before my present re-read was after seeing and loving the Spider-Man 2 movie, and on that occasion I was struck at how inferior the story is in every respect to the film version: in the villain's motivation, his origin story, his plans, and in Spidey's resourcefulness.

But of course the film-makers had a half-century of Spider-Man lore to lean on, including heaven only knows how many Doc Ock stories. The astonishing thing about Lee and Ditko at this stage is that they are just making this stuff up, month after month. This time, Doctor Octopus; next month [spoiler alert!] they will invent The Sandman; two months later they will come up with The Lizard. Half a year later, they will go on to create Mysterio and the Green Goblin in consecutive months. How on earth did they keep on coming up with these guys? It's almost enough to make you forget the Terrible Tinkerer

At exactly the same time, of course, on the other side of the Atlantic, the Beatles were reinventing popular music. What a time. Bliss it must have been it in that dawn to be alive, but to be young would have been very heaven.

Yeah, I have to agree with Mike. This story seems clumsy and a bit dopey because we're reading it after 50+ years of incremental improvements have dramatically raised the game. In 1963 it would have been a lot more impressive.

Doctor Octopus is the first of several villains who are recognizably inversions of one or more aspects of Spider Man. He's a brilliant scientist, but physically unattractive -- short, fat, with strange thick glasses. His powers, like Peter Parker's, are a combination of "gained in an accident" and "brilliance of his own design". His powers echo Spider-Man's -- wall climbing, strength, he is his own web and he sits at the center of it. And he's inverted obvious insecurity into an immense ego -- what is channeled into relatively harmless wisecracking and mockery in Spider-Man is something mad and monstrous with Doc Ock, but it's clearly tapping the same wellspring.

The villain who appears here is just a crude sketch, and you can see Ditko struggling to figure out how to use him visually. But right from the beginning, the potential was there.