The award goes to Jon Boden, for being the only person to have recorded a new folksong every day for 365 days. Some of them deserved to be consigned to oblivious (I am looking at YOU, Big Rock Candy Mountains, and YOU King of Rome) but many of them ( Four Angels, O'Hamlet) were worth repeated listens, and he introduced me to lots of cool songs (e.g The Mistletoe Bough, A Chat With Your Mother) which I didn't know, which was presumably the point of the excercise.

THE "TAKES OUT AN ONION" AWARD FOR MAKING THE JUDGE CRY

Steve Knightley, Fisherman's Friends and the entire company, but this time chiefly yourselves,
for Cousin Jack, also at Bristol Folk Festival

WINNER
Stan Rogers for Stan Rogers' Mary Ellen Carter, which, in a rare show of unanimity, the readers of this blog voted "single best song ever written by anyone about anything ever".

SPECIAL AWARD FOR THE JUDGE'S COOLEST MUSIC-RELATED MOMENT OF 2011

* Lustily and tuneless singing along with Fishemen's Friends singing Cousin Jack in the mud at the Pyramd Stage at Glastonbury, and noticing that Steve Knightley was standing next to him

* Standing on York station, desperately hoping that the old gentleman with the guitar case to whom he has just said "We really enjoyed your set, sir, such a shame you were so far from the audience" really had been Martin Carthy. (Or if, indeed, he had dreamt the whole incident.)

* Hearing The Pentangle doing a set consisting entirely of traddy classics at Glastonbury, unaware that this was the last but one performance Bert Jansch would give.

WINNER
No award. You can't give an award for something sad.

Ralph McTell
for Girl from the Noth Country at St Georges, Bristol, 29 Sep

Bob Dylan
for Man in the Long Black Coat at Cardiff Arena, Oct 13

It's shame Dylan didn't sing Seven Curses, so I could have had an award for "the best live performance of Dylan's Seven Curses."

The judge unanimously gave the award to Bob Dylan's show in Cardiff Arena.

The first night of an opera is generally judged a failure unless a sizable proportion of the audience boo; similarly, the Poet Laureate of Rock and Roll wouldn't have done a show unless some people claimed to have walked out of it. It is widely believed that Bob's promoters fill the back rows with an anti-claque who are only there so they can leave after the opening number.

It must be admitted that, in order to understand Dylan's current approach to his muse (a.k.a "whatever the hell it is he thinks he's doing nowadays") you need to

a: have heard at least three albums since MTV Unplugged

b: Be reasonably familiar with his lessor known material (NOTE: Knowing some of the words to Like a Rolling Stone doesn't count)

c: Be sitting or standing in the front five rows.

If you fulfil all those criteria, than you will be treated to a Robert Zimmerman becoming in his autumn years the artist I am convinced he has always wanted to be – the bluesy, rock-a-billy song and dance man, grinning and mincing and riffing and colluding with the audience.

In short: this was the gig I am most likely to tell my non-existent grandchildren about.

"But Andrew, would you have praised this very strange show so highly if you had never heard of Bob Dylan?"

"If I had never heard of Bob Dylan then I would never have heard any of Bob Dylan's songs. Under those circumstances, if this grizzled old man in a sweaty cowboy hat had snarled into a small venue and started growling, I would have said 'What marvellous songs...get me a pen and paper, these may be the greatest lyrics that have ever been written...what fantastic tunes...what a weird-arse way of singing them."

THE MUDDY WELLINGTON BOOT AWARD FOR THE MOST IDIOSYNCRATIC VENUE 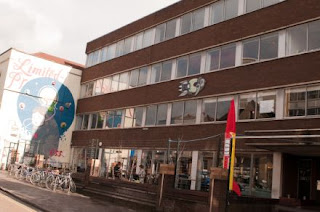 The Canteen, a sort of perfectly legal squat in a disused open plan office, is allegedly the creative hub of the coolest, most creative street in England, or, if you believe the Bristol Evening Post, the place where crusty hippy commies hang out who ought to get a job and be forced to eat Tescos sandwiches and Banksy ought to be flogged like they did to that kid who painted graffiti on Singapore. I digress. One of the Canteens U.S.Ps, apart from real ale and very decent food at very reasonable prices (you get a free bowl of soup with a meal, which is a really civilised touch) is live music -- I've heard both the aforementioned Pilgrims' Way and the not yet mentioned Hoddamadoddery there.

Well, "heard" is a slight overstatement: it's a bar. People are right up near the stage trying to finish designing their websites on the Macbooks, or with their course work on Brecht spread out in front of them; or else they are drinking and trying to have a conversation with their mates, wondering when the distracting noise at the front is going to stop. This probably works very well with that loud electrical rhythm stuff that the young people allegedly like but which no-one actually wants to listen to in the first place, but it's really not the environment in which to hear Pilgrims' Way telling you about the hand weaver who fell in love with the factory maid. Not sure what the solution is. Shame.


Plastic, football stadium style seating. Numbered seats, although this didn't make much difference, because the arena was about ¼ full. A river, possibly the river Derwent, running through the complex, separating the audience from the stage. The impact of Bellowhead is slightly numbed when they are several miles away from you, and with the best will in the world, its hard to get the nuances of the aforementioned Jim Moray doing the aforementioned Lord Douglas in that environment. During the Demon Barber's set, a man with a guitar ambled through the audience who were, by this time, standing on the tarmac near the rail. He turned out to be Martin Carthy. 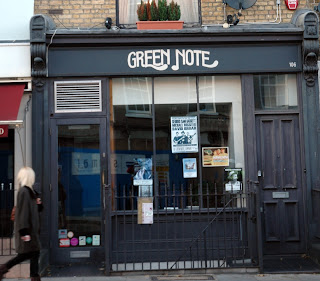 About 100 yards from Cecil Sharp House itself. Fits 50, of whom about 20 can sit down. Admission only granted to people who know a special hand shake (I made that up). If you want to sit, you need to buy a ticket AND book a table and eat. If you want a table near the stage, you have to form a queue at 6, and take you seat at 7, in plenty of time for the music at 9. In return, you get to hear Martin Carthy, Alasdair Roberts, Robin Williamson in surroundings that redefine the word "intimate". I love this place to bits.

AND THE WINNER IS:
Parsley, sage, rosemary and thyme. .
Email ThisBlogThis!Share to TwitterShare to FacebookShare to Pinterest
Labels: MONTY AWARDS, Music

I'm going to do an award for Bristol blogger stalking Martin Carthy...

Very much enjoyed this series of posts. June Tabor's Seven Curses was the best Dylan cover in *years* though.