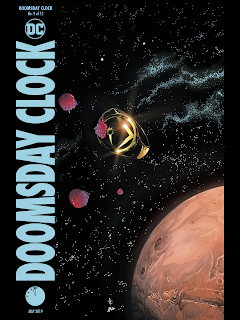 You've been a Batman fan since you were a little kid; and a jobbing comic-book hack since you left college; and it has finally happened: you are going to write your very own Batman Story. (Page 1, panel 1: "The Bat Cave..." You've waited your whole life for this moment.) The most -- the very very most -- you can hope for is that it will be a story that is fondly remembered by future generations of Bat-Nerds. "Of all the stories in which the Penguin has kidnapped Barbara Gordon" you imagine them saying "That was definitely in the top fifty."

But that's not enough, is it? You don't want to be remembered as one of the good Bat-writers. The Bat-myth is much more important than any actual story: you need to leave your thumbprint on the Myth itself. You have to find some way of binding your successor: your Penguin story has to influence all other Penguin stories for as long as Batman endures. "That was the story which first revealed that the Penguin was Thomas Wayne's estranged brother and therefore Batman's wicked uncle" they will say "And now all us Future Batman Writers have to stick with that." (NOTE: That is a made up example. At least, I sincerely hope it is.) 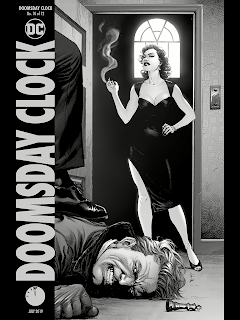 But even this may not be enough for you. With the growth of the Insatiable Continuity Beast the truly hubristic Bat-scribe has an even more grandiose way of exerting control over the Tradition. If you are clever enough, and if you can get yourself commissioned to write this decade's Universe Defining Mega Continuity Crossover, you get to define what stories can and what stories cannot be told for decades, or at any rate weeks, to come. Penguins will live. Penguins will die. And the Bat Universe will never be the same again. You will be remembered as the writer who wiped out Earth-2 and thereby stopped the Future Writers from telling tales about a grey-haired Dick Grayson and the late Bruce Wayne's daughter. It was you who dissolved the multiverse so that no story involving the Flashes of Several Worlds could ever be written again.

Actually, the only thing which determines the influence one writer has on the writers who come after him is a certain sort of Darwinian fan consensus, survival of the least uninteresting. Frank Miller successfully turned Daredevil into a Ninja because the idea of Ninja Daredevil is manifestly more interesting than Very Slightly Grimmer Version of Spider-Man Daredevil. If the idea hadn't worked it would have been discretely forgotten. We can Crisis as much as we want to; but Superman's human parents will always be alive; because a Superman who can go and visit a sweet little grey haired old homestead in Kansas is much more interesting than one who swore to use his powers only for good on his father's deathbed. That is John Byrne's legacy. Everyone has forgotten his Krypton because it was krap.

I thought that Grant Morrison was supposed to have sorted out DC cosmology a decade ago? (Hypertime, was it?) Are we already due for a meta-reboot? 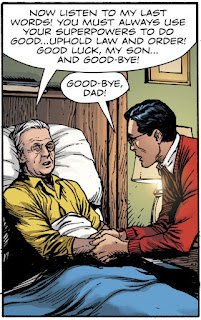 We start with three wordless pages -- nine long thin panels -- showing different groups of heroes on different kinds of spaceships. One ship has Hawkman and Big Barda and Mr Miracle; another has some Green Lanterns and Wonder Girl; one has the JLA; another has Shazam and all the little Shazams and one even has Swamp Thing and John Constantine. (Does the idea of John Constantine on a spaceship to Mars go against the whole idea of John Constantine? Can any such character as Spider-Man continue to exist in a Universe where a character called Spider-Man can fight Thanos in Outer Space?) I thought this was quite fun; recalling the endless shifting battle fronts in the original Crisis on Infinite Earths, but it is also a pretty cheap way of getting my attention. Hey kid, here are some superheroes. And here are some more superheroes. And here are even more superheroes! Superheroes! Superheroes! Superheroes!

Last issue, Firestorm apparently lost control of his powers and nuked Moscow -- and incidentally put Superman in a coma -- which the Russians are treating as an act of War. But in fact the explosion wasn't caused by Firestorm: it was apparently caused by Doctor Manhattan. On Mars. Except it may not have been. So all the heroes who are still standing fly off to Mars to confront Doctor Manhattan. Batman isn't convinced this is a great idea.

Bits and pieces of what follows are not unfun. Green Lantern envelopes Mars in a big green sphere and Firestorm turns the atmosphere into something the humans can breathe. Guy Gardner punches Doctor Manhattan. One of the younger Shazams finds his nudity "gross". Doctor Manhattan provides a scientific explanation for "magic". Captain Atom kills Doctor Manhattan, but he gets better. Once everyone has had a go, Doctor Manhattan knocks them all out with pretty much a wave of his hand.

The next issue primarily consists of Doctor Manhattan talking to himself. Since he ran away from Earth-WM and arrived on Earth-DC he has been observing all the ret-cons and reboots from the inside. He arrives on Earth-DC in 1938 and hears news reports of Superman's first appearance. (A man in a wrestling costume so strong that he can lift a car!) But when he follows the news story up, Superman is not there: because his arrival on earth has been pushed forward to 1956 and then to 1986. Each time the date of Superman's nativity changes, Earth-DC changes around him. It's quite fun to see the different iterations of Superman laid out side by side -- Pa and Ma Kent finding a pointy space rocket in one of their fields; and Jonathan and Martha stumbling on a John Byrne incubation sphere; Superman's dad telling him to go to Metropolis and become a Superhero from his death bed; Superman's ageing Mum knitting his first Superman costume for him. Doctor Manhattan witnesses the first meeting of the Justice Society (which is of course a lot like the first meeting of the Minute-men, only less rapey). In one version they are waiting for Superman to turn up; in another version Superman is not invited because he doesn't exist. 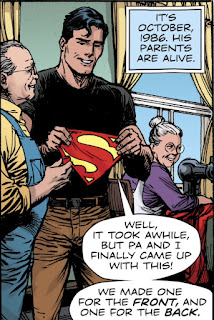 Doctor Manhattan himself starts to deliberately affect changes in continuity. He prevents Alan Scott becoming Green Lantern; which appears to prevent the formation of the Justice Society; and due to some jiggery pokery with a flight ring that went completely over my head, he prevents the Legion of Superheroes from coming into being as well. He also seems to cause Superman's earth parents to die in a car crash just before he leaves high school, as foreshadowed in Clark's dream in issue #1. The result is that the Superman of Doomsday Clock is more detached from the rest of humanity than the standard DC version. More like Doctor Manhattan.

So, are you ready now: here comes Geoff Johns' Great Big Idea which will change the DC universe forever, or at least until next summer.

This could count as a Spoiler.

We all know about the Multiverse. Alongside our world, there is a world where Hitler won the war, a world where Rome never fell, and also billions of worlds exactly like each other except that one particular tree in the Bazillion rain forest has one slightly different shaped leaf. Up to now, the various version of DC mythology have been regarded as different branches of the multiverse. In one branch Superman is a muscular reformist who sends gangsters to the electric chair; in another he is a camp nice guy who does super-chores and frolics with his super-pets.

What are the chances? DC's most famous super-hero is the central pivot point of the entire multiverse.

It's a not un-clever idea, I suppose, but its too...knowing. Too meta. Yes, obviously all worlds in the DC canon are copies and variations of one original DC universe; and yes, obviously that DC universe wouldn't exist if little Joey and Jerry hadn't thunk up Superman in 1938. But trying to make that a cosmological principal that is true from a story-internal perspective....? Its too much like someone in Thunderbirds saying "How come our facial expressions never change?" or DCI Barnaby becoming obsessed with the idea that Midsommer has been built over a Hellmouth because of its statistically improbable murder-rate. And if you aren't a hard core comic book fan, it's pretty impenetrable. It's one thing to tell a new reader "On Earth-X, Lex Luther is the goodie and Superman is the baddie." It's quite another to expect them to swallow "The multiverse reacts to this universe. There have been endless parallel worlds. None, fifty two. Dark multiverses all created by changes to this universe."

So Manhattan is by himself on Mars, waiting to confront Superman. I suppose the only remaining question is "Will Doctor Manhattan's meddling leave us with a DC universe which is cynical and dark, like Watchmen" or "Will Doctor Manhattan realize his mistake and return us to a more hopeful, four-coloured comic-booky DC Universe."

There are still two issues to go. 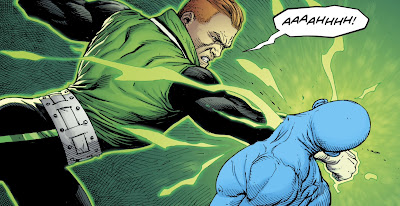 I'm Andrew. I write about folk music, God, comic books, Star Wars and Jeremy Corbyn.
If you are enjoying my essays, please buy me a "coffee" (by dropping £3 in the tip jar)
Or consider supporting me on Patreon (by pledging $1 for each essay)

It's mildly interesting to see that Marvel seem to be taking a vaguely similar "metaverse" route to tackling continuity with their current House of X series, although there they seem to be going for something more akin to a Groundhog Day approach, which is possibly easier for casual and new readers to get a handle on; the Doomsday Clock is clearly more oriented to the enfranchised (although I do think that at least it makes the "New 52" project vaguely worthwhile as opposed to a dud.)