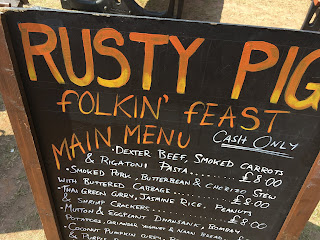 NOTE:=You are almost certainly not the first person to have spotted that the word “folk” sounds a bit like the word “fuck”.

You all probably think I am mad. I passed on all the Big Venues again today (no one needs to hear the Spooky Men twice in a week) and hung mostly around the Woodlands Hotel. I have to remind myself that I bought a season ticket so I am free to choose what to go to, not to oblige me to go the most expensive ones. A blue plaque tells me that the Woodlands Hotel was a thatched medieval barn and then the home of one of Nelson’s captains. I think I listened to traditional music from 11.15 to 10.30. It’s a marathon, not a sprint and I won’t keep this up for a week, but I hate the idea of missing anything. Yesterday’s big hit Ragged Trousers we’re playing at every venue I went to. They did an astonishing things combining two versions of the Cruel Mother, but the ten minute introduction was probably as important at the song. . At the time the song was written, conceiving a child out of wedlock was a criminal offense and if a baby died there was a presumption that the mother had killed it. So a lot of women would have been burying babies near wells in forests and down by the greenwoods of ivy, oh. (I have probably heard the Flying Cloud as many times as I need to, though.) 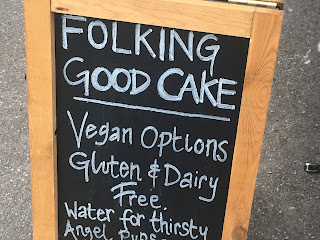 I suppose I am search for the Great Folk Moment, that at some point in a pub someone unlikely will pick up a fiddle and sing the perfect Marty Groves and I don’t want to risk eating a pasty while it is happening.

The Woodlands hotel runs a two hour ballad session for all comers every evening, with a stern warning that only traditional songs are permitted. All the usual suspects appear — there will be a Bruton Town and a Fair Flower of Northumberland. The afternoon mini concert kicked off with a folk couple (Annie Winters and Paul Down, possibly) singing a song beginning “it is of two noble butchers” so I knew I was in the right place. I have heard stories in which a fair lady runs off with seven yellow gypsies, raggle taggle gypsies and someone called Black Jack Davey, but today the abductor was a dark eyed gypsy. The lady didn’t mind, as normal, and was quite looking forward to drinking the dew and eating the grass, which instantly set me thinking about whether gyspsys are stand ins for fairies. Almost certainly, now I think of it. Ballads are the heart of English music and these sessions are for me the heart of the festival. I wish i could hold a tune.

One of the formats for song hearing is called “an hour or so in the company of” which is pretty much what it sounds like, and informal session in which the singer can chat or play as the mood takes him. Today we had an hour or so in the company of Damien Barber and Tony Hall. Damien Barber is of course the brains behind the Demon Barbers dance group, but he’s getting back into solo performing. He said he’d asked for small venues but the Woodlands was packed. He ended the hour with Little Pot Stove. Tony Hall accompanied him on an ancient squeeze box. It just so happens that Tony Hall played that exact squeeze box with Nic Jones on Penguin Eggs.

As I say. Folk moments. You presumably think I am entirely mad. 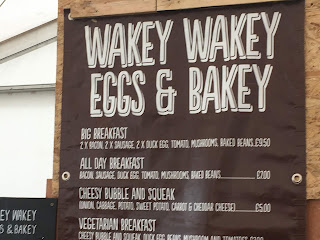 Well, Andrew, every time I read one of the blog-posts and see statements like They did an astonishing things combining two versions of the Cruel Mother [...] I have probably heard the Flying Cloud as many times as I need to, though [...] All the usual suspects appear — there will be a Bruton Town and a Fair Flower of Northumberland, I am forcibly reminded that there is a recognised repertoire of "proper folk" (as opposed to the sort of Joni Mitchell/Paul Simon/Beatles stuff I do in folk clubs) and that I don't know any of it. I don't suppose you could recommend a compilation album that would introduce me to most of the standards?

One good place to start might be Anais Mitchell and Jefferson Hamer's "Child Ballads".

(James Child was a nineteenth century academic who compiled the standard collection of ballads. You probably knew that.)

Thank you, this seems like exactly the kind of thing I was hoping for. I really like they way to do the songs (at least, based on https://www.youtube.com/watch?v=VjsBKugxP7Y )