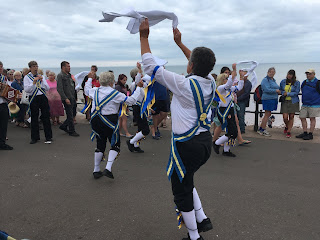 There are no cash points in Sidmouth!

At any rate none of the cash points are giving out money, and none of the shops are doing cash back. And most of the pie kiosks are cash only! Fortunately the bar at the Ham is happy with plastic.


I had forgotten that the best bit of the folk week is about 1030 at night after the big gig has finished, walking around the seaside streets following the sounds of diddly diddly dee and sea shanties into pubs which haven’t quite closed. There was a yeehar band singing Old Dan Tucker in the Duke on the sea front, and some guys sitting round a table in the Black Swan singing South Australia and Rock Me Mother Like A Southbound Train while another guy accompanied them on the hurdy gurdy. I had heard a couple of hurdy gurdy players busking no on the esplanade earlier in the day. And someone singing a Rock Me Mama co e to think of it. You can go for years without hearing a busker with a hurdy gurdy and then two come at once. The word “esplanade” makes me think of Jake Thackeray. To me the road by the beach is the promenade. 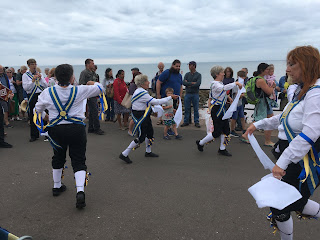 Steve Knightly (sans Phil and Miranda) called his show 50 Shades of Sidmouth. It was meant to be a retrospective on 50 years of coming to the festival. It started out in the vein of his 2017 solo show about his career, with stories about learning to play guitar by playing Dylan records at half speed and making the audience try to guess the lyrics of his first ever song. Before long he was bringing on friends from the old days . An old club singer gamely got through Paddy’s Sicknote. He was reunited with Paul Downs who played with him in his first band, Gawain. (They were big enough to open for Steeleye: I never knew that.) I felt that the Sidmouth narrative became a bit lost as the evening went on. His teenaged daughter helped him sing Let Me Feel Your Love, Edgelarks participated in The Keeper, and Sidmouth brass band came on for the last few numbers. Any show which ends with Cousin Jack on a brass band is fine with me me. Rather a jolly brass arrangement, I would have said, but very clever the way they worked the accompaniment in with Steve’s spoken improvised sections.

Instead of an encore, the entire company sang The Larks They Sang Melodians. 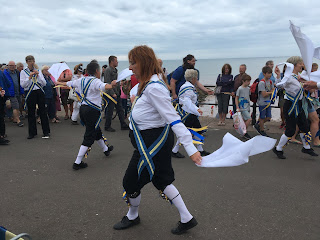 Earlier in the day I went to a stripped down acoustic version of Merry Hell. Their acoustic version worked much better for me than their louder electrical version which I’ve heard before. Think Three Daft Monkeys with a bit of Oysterband and a bit even of Show of Hands. Come on England will probably annoy the same kinds of people who were annoyed by Roots. One of the reasons I relocated to the folk world is that it gives me a space to be patriotic without being, you know, patriotic.

So stand up, come on England, live up to your history
Your heart can't be held in a flag or a crown
Raise your teacups and glasses, you bold lads and lasses
And drink to the spirit that will never lie down

I asked a few years ago who was going to speak truth to power now Chumbawamba are gone. There was a moment where I thought Merry Hell were about to answer the question.

Best song of the day was Hannah Rarity doing an almost comprehensible Scots traditional number about an ugly witch who turns a man into a worm for saying so. 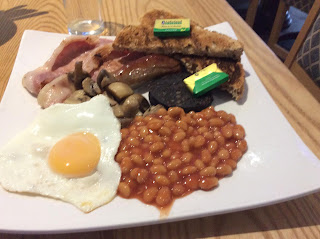