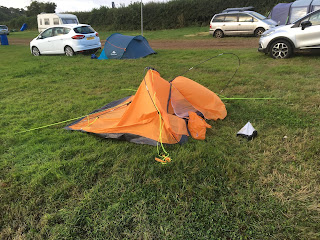 It rained and it rained and it rained. Piglet said never before -- and he had been coming to Sidmouth for goodness knows how long... two years was it or maybe three? --  had he seen such rain. And first they cancelled the fireworks and then they cancelled the parade. Then they moved all the things from the Ham to the Bulverton. And then they had to close the Bulverton, 20 minute into Granny’s Attic’s set, because it wasn’t safe. The marquee, I mean, not the band.

My very small tent didn’t literally blow away. In fact I am quite impressed by the extent to which modern tents behave like Chumbawamba during a high wind. But in the end one of the polls split. It was, however, pretty dry, so I decided my best bet was to sit the storm out in what increasingly resembled a large flat canvass bag. I should probably have arranged an interview with the media about world peace.

I did get to hear Sid and Jinmy being relaxed and chatty, and the Shee singing Tom Paines’ bones and an American gospelly bluesy lady who wasn’t at all my kind of thing. but history will record that the festival should have ended with the Thunderbird barn dance last night.

Written in Subway near Exeter bus station (on an iphone) 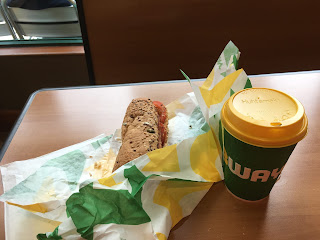 I'm very sorry to hear this, and not just because I've been vicariously enjoying your week by reading these.

Glad you've been enjoying the diaries. I shall try to do better at off-the-cuff gig and CD reviews in the next few months.

The Weather didn't really spoil the week: I'd been planning to get to 3 shows on Friday, and only one of them was cancelled. Everyone would have left on Saturday morning regardless. If the Tent had died on Day One, that would have been more of a problem (although I suspect I would have hopped on a bus to Exeter and bought a replacement.)