So. A knight rapes a poor maiden and sensibly tells her his real name so she can name the child after him. So she tells the king and the king says he has to marry her. Just to rub it in, she goes to the wedding dressed as a lady and he has to go dressed as a page. A young man asks his sister why she looks so poorly. Because I’m pregnant with your child, she says. So he kills her. A man gets two ladies pregnant, marries one and the other hangs herself. So he runs away to sea. But her ghost comes after him in a boat and drowns him.

Ballads are great. An old guy at Woodlands did the most perfect Patrick Spens I’ve ever heard, in perfect Scots. (Man sails to Nor A Way, Man sails back from Nor A Way. Everyone drowns.)

Nick Hart also sings ballads. Nick Hart’s ballads take no prisoners. Even he admits that his version of Two Sisters goes on a bit. There is Nick Hart, there is a guitar, and in the Kellaway Cellar there is sometimes Ben Moss) as in Moore, Moss and Rutter) on a fiddle. There has been a generation of folkies adding twiddly bits and guitars and synths to folk songs; now there is Nick Hart singing them, sometimes even with that folkie nasal twang. Nick Hart is the Anti-Jim. He’s the most exciting thing in traditional folk at the moment.

The cashpoints are working again. I celebrated with a cup of coffee. (Nick Hart recommended Buzz, the coffee stand in the craft field. They are indeed excellent.)

Sam Sweeney or Robb Johnson? Robb Johnson or Sam Sweeney? Sam Sweeney made my favourite album of last year, one of the few instrumental albums I would listen to voluntarily. Robb Johnson is a marxist primary school teacher who has been called the best songwriter after Richard Thomson and ought to be twice as famous. I opted for the songs, because I felt a whole two hours of fiddle playing might be challenging on a Monday afternoon. Judging by the empty seats at the Manor Pavillon everyone else chose the fiddle tunes.

Sidmouth has a dinky little theatre, complete with comedy and tragedy masks in gold over the proscenium arch. It’s the only proper rep theatre still running in the UK. Over the summer they are doing Present Laughter and The Kings Speech and Run for Your Wife. (“And the terrible thing” said Satan “is that this could be heaven for some poor sod.”)

I really can’t be doing with Gaelic, so I went back to the theatre for a programme of Dartmoor Entertainment. Lots of jolly accordions. Jim Causley doing that one about the tin mines. Step dancing. And a literal jig doll. But no rape or incest.

Diary written on a bench outside Sidmouth Public Library 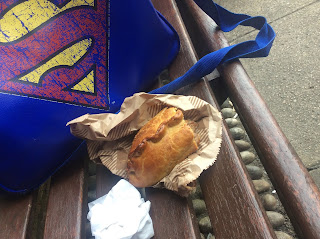