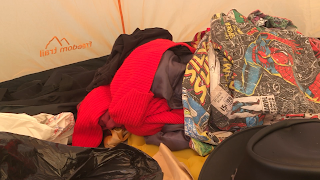 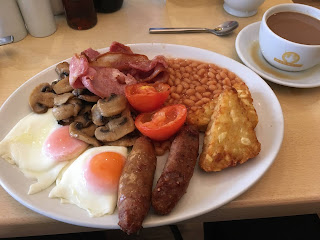 I'm not at Sidmouth this year, and have been slightly envying you until I saw the weather forecasts. Make sure your guy ropes are pegged down securely, and good luck!

What happened to my other comment that came before the one above where I said Bob and Carole Pegg did a version of the song about the lady folksinger who became an exotic dancer on an album they made with Carter in the seventies? The song features the lines 'You would not think from the way I dress/I belong to the EFDSS' Listen on the link above. Also worth listening to the Pegg's version of Lord af the Dance which anticipates what Ashley Hutchings did with Morris music a few years later. Not too surprising since the Peggs were slated to be in the original Steeleye Span and had written songs with Hutchings in anticipation of that. I think Mr Trill's song which Bob co-wrote with Hutchings may be the first fully electric morris song.

I don’tt know what happened to the other message either, but am glad you reposted it. (A glitch in the matrix, as they say.)

You have me thinking about Sydney Carter now. I agree that a lot of his Christian songs reflect a fairly mainstream theology but then he always said Lord of the Dance was inspired by an image of Shiva dancing. I used to have a book he wrote called Dance in the Dark which I read until it disintegrated. It was written in the same style as some of the pop psychology books with striking comments in large letters on every other page; my faviourite was 'Cowper is Mad and Abelard loves Heloise'. Which was his way of saying Christians can have problems or flaws which do not detract from their faith or message. He abhored hypocrisy and he disliked conformist conventionality. He did a song about trendy vicars that included the lines: 'We love the merry organ and the bells accross the snow/ We love the Church of England although we never go/We love the dear old Bible with Jehovah and begat/It's not that we believe in it or anything like that' But as you say it's a bit like looking into a time capsule; the trendy vicar has become a cliche and no one believes you can trust people because they have guitars in Church. Another good collection of his songs from the sixties is called The Present Tense, some of the singing is a bit over formal but it includes The Vicar is a Beatnik that I quoted above and a great version of George Fox.
https://www.youtube.com/watch?v=XBBzJU4xikM
And here are the two Bob and Carole Pegg albums I posted links for before
https://www.youtube.com/watch?v=YDUoMok40Rw&t=33s
https://www.youtube.com/watch?v=S_YyCI_62dM&t=503s