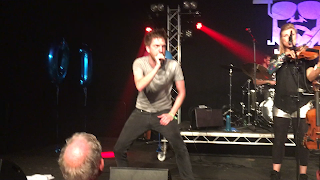 Lady spent entire concert writing postcards and letters. Full on address book, envelopes, stamps on her knee. I found this both distracting and disrespectful to the band.

I am fairly serious: the difference between going to a concert and listening to a CD is that you are in a big room of people who all love the music and are all singing, or crying, or laughing, or stomping their feet. Kind of sacramental. One infidel spoils the magic.

She told me afterwards how brilliant the band was and what a great show it has been, so I couldn’t even decently “tut” at her.

I managed to hear eight different acts today, including four of my most very favourites. And also a lecture about Sabine Baring Gould, the Other Victorian folk song collector, who also wrote one or two moderately well known hymns. He realised (which Sharp did not) that the songs which “peasants” were singing at the end of the 19th century were in many cases not written by immemorial pagan bards in prehistory, but were for the most part seventeenth and eighteenth century pop songs.

Sid and Jimmy (Aldridge and Goldsmith) in combination with Nancy and James (Kerr and Fagan) is as good a double bill as you can get, and very possibly the best ticket of the week. Sid and Jimmy are up for a folk award for their traditional Norfolk love song “the Reedcutters Daughter”. They’d obviously been told to cut the chatter . Sid in particular was not allowed to talk about soil erosion or environmental issues. So they chattered about not chattering. But truthfully they need to rebrand themselves as folksingers and story tellers: each song has a narrative associated with its genesis which audiences need to hear. A little like Simon and Garfunkel, they don’t exactly sing harmony but their two voices some how merge into one perfect voice.

Nancy and James did Hearts That Long for the Land and Farewell to the Gold and Robb Johnson’s Herald of Free Enterprise, which is somehow improved by no longer being topical. And then they did Dance To Your Daddy and melted everyone’s hearts.

The weather arrived. There is apparently a serious danger that the Ham Marquee may blow away. They have already had to cancel the fireworks. I felt that spending a whole evening looking as if I’d fallen in a swimming pool was probably not going to be too much fun, so I stuffed dry clothes into my bag and changed at the top of the hill. Which actually made me feel quite smug. And dry. (Remind me to write an amusing essay about Modesty one of these weeks.)

Blackbeard’s Tea Party are basically my favourite band in the world. They started out, a decade ago, as a not un Mawkinish acoustic set up, busking in front of a church in York, but album by album they have become folkier and rockier. They now have two drum kits and arrangements which slip into the realm of self parody, in an entirely good sense. But there is still folk fiddle and folk accordion and a mostly traditional set list. Chickens are on rafts, diamonds are bound for the Davis Straits, Captain Kidd leaves William Moore in his gore and the landlord endlessly refills the flowing bowl. The lead singer and accordionist is a part time morris dancer who leaps around the stage and into the audience. They are a brand, a cult, a phenomenon, and they never forget it is folk music. 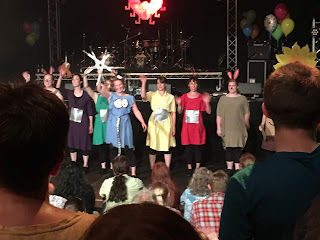 Today has been designated their tenth birthday, and there are balloons and party hats. Not only do they do a full electric set, but after a brief break they come back onto the stage and provide ceilidh music until 1 in the morning. In keeping with the ten-year-old birthday theme, they come on dressed as creditable Thunderbirds characters, to the International Rescue theme. The caller has been prevailed onto to dress as Jeff Tracey. In the interval, as is traditional, a rapper side do a demonstration. They do a full sword dance routine in the style and costume of the Tellytubbies. We take our folk seriously.

Before Blackbeard start, Thom Ashworth does a set. I heard him earlier in the day in the Bedford. He explained that he was in receipt of a bursary from Cecil Sharp House to research what it means to be English in a post colonial world. (I mean there are lots of things I am angry about and would like the money to make an album, he explains, but you can’t put that on a grant application.) Quite a tough gig, I would have said, being one man with a guitar in front of an audience who are waiting for the madness which his Blackbeard’s Tea Party.

He opened up with Alan Tyne of Harrow, one of the best highwayman songs and certainly the one with the best tune. (He sings “now in Newgate I am bound and by the law indicted / to hang on Tyburn tree’s my fate of which I’m much afrighted.” Nancy and James always sang it as “by the law convicted” which doesn’t rhyme. Jim Moray thinks Alan Tyne of Harrow may be closely related to an Irishman called Valentine O’Hara.)

There’s a man on the stage. Singing a song about a highwayman. A song that generations of singers have sung. A song which is very largely speaking for itself.

“But being of a courage keen and likewise able bodied,
Well, I robbed Lord Lowndes on the King's highway with my pistols heavy loaded.
I clapped my pistols to his breast which caused him for to quiver,
And five hundred pound in ready gold to me he did deliver.”

I don’t think I experienced a more perfect moment over the whole week. At that moment I would happily have hugged him, or prostrated myself before him. (Rest assured I resisted the temptation.)

At 2am my tent was still standing and reasonably dry. 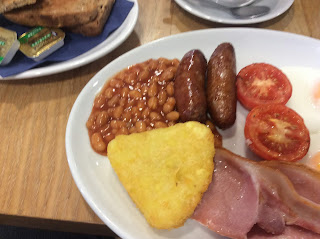