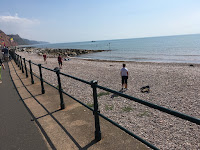 Oh the English, the English sunbathing and playing cricket on a pebbly shingly beach taking surfboards out into a calm sparkling blue sea that never saw the slightest bit of surf making the most of the relatively hot weather on the grounds that it will probably be snowing by the end of the week.

People behind me on the bus try too start rousing chorus of The Wild Rover, but’s dispute develops between proponents of the Irish version (wild rover! wild rover!) and the English version (no,nay, never).

The bar at the Ham (the main in town sit down concert marquee) is woefully inadequate for 10000 folkies all wanting real ale in the 15 minute interval. I was impressed with the lady trying to catch the bar staffs eye through the power of natural justice (no, i have been waiting longer,i was in the back row so i should have been served first.) Also impressed with people complaining to the stewards because they didn’t arrange different weather.

Sidmouth Toyshop may have missed an important memo. 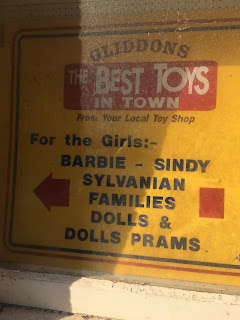 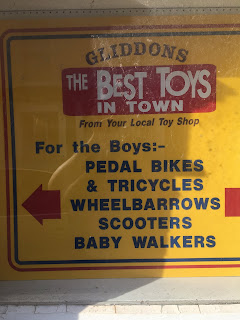 The second Pre Festival gig features one Ralph McTell who needs no introductions but still gets one. It is apparently the 50th anniversary of That Song. Someone tells me that it was originally written to persuade a drug addict friend to turn his life around. I hope this is true because some people have taken it to mean “middle class people have no right to be depressed”. Because of That Song’s middle brow ubiquity, it is easy to forget that Ralph McTell started out as a disciple of Woody Guthrie, and when he isn’t talking about early bluesmen (“the ghost of Robert Johnson) he is lauding Bob Dylan (“the Zimmerman blues”). Rather a lot of his songs are about other singers and other artists — I am not sure that extending the “girl on the New Jersy ferry” incident to a whole song says anything which Orson Wells hasn’t already said just as well. The older he get, the more Johnny Cash I hear in his delivery. No one song will ever be as famous as Streets of London, but he can produce endless jaw dropping lyrics. “Dylan and Rotolo in a freeze farm photograph. eternally tomorrow” “she had us kind of hypnotized she made us hold our breath but if you want to love your life you have to flirt with death”,

Up and coming and slightly intimidated Kitty McFarlane opened for him. She gets better every time I hear her. She has added field recordings of birdsong and nature sounds to her enigmatic mediative songs. The incredibly convoluted migratory patterns of European eels suggests migration in a wider sense, becoming a “a very, very subtle protest song.” The last known proponent of the art of weaving sea silk (silk gathered from clams) becomes a metaphor for women’s agency “until the time I am undone I’ll spin saltwater into sun”.

Lady Maisery are always wonderful. However, I have heard them quite a lot, so on a whim I let them be wonderful without me and headed for the more intimate Kellaway Cellar space. This turned out to be a Good Choice : three super traditional acts who I wouldn’t otherwise have heard.

Alice Jones comes from Halifax and does heartfelt cheeky northern songs. We had “from Hull and Hell and Halifax good lord deliver me” of course, and one I hadn’t heard before about weavers which went to Hard Times of Old England (so sing success to the weavers. the weavers forever, huzzah!) She also has a nice line in that “body percussion” thing where you accompany a song by slapping yourself round the face.

Jeff Warner has been singing traditional American songs and telling banjo jokes since forever. He oscillates between singing and speaking the words, occasionally pulls out a jews harp s raises playing the spoons almost to the level of a juggling act. Do you know, I don’t think i’d ever heard All About The Renters on Penny’s Farm before? (It was lovingly ripped off by Bob for Hard Time in New York Town.) We got a Loggers Alphabet and a deeply silly version of the Farmers Cursed wife.

Ragged Trousers do shanties. And other robust masculine songs, including a rousingly ranty Riggs of the Time; and their own version of a Chartist anthem. (“Have you noticed that chartist anthems never actually mention constitutional reform? I suppose nothing rhymes with “election”.)But the highlight was the extended ballad about the chap who is born on fair Erin’s shore , decided to make his living selling slaves, falls in with the pirates and ends up with a one way ticket to tyburn. This is what we come to folk festivals to listen to. The band were o intensely interested in the backgrounds to their songs and their harmonies were robust enough to knock the socks off any Cornish beach. I’m off to hear them again as soon as I finish breakfast. 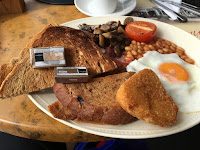